“Each medium of expression imposes its own limitations on the artists – limitations inherent in the tools, materials, or processes he employs. In the older art forms natural confines are so well established they are taken for granted. We select music or dancing, sculpture or writing because we feel that within the frame of that particular medium we can best express whatever it is we have to say.” Edward Weston

After a few months spent in Poland I decided to change environment for a while and go on next trip. This time I went to Thailand. I flew from Warsaw to Bangkok with Fidrygalka. We stayed for two days in the capital and then started cycling towards Chiang Mai, the city situated in the north of Thailand. It took us twelve days to get there, where we spent a month. I was working on finishing writing the book, which hopefully will be published in 2019. It is based on the journey from Patagonia to Alaska I undertook in 2016-1018. Maybe one day it will be translated and published in English, but I suppose, rather posthumously.

Anyway, returning to the trip – I would like to write about Thailand. Frankly speaking I have very little to add in the topic that the world on the road seems to be like a fairy tale. The accumulation of magical and fantastic elements is so intense and frequent that after a few days you stop treating them as something peculiar, and you start perceiving them as a full-fledged reality, not requiring confirmation by any rational knowledge. And, as if everything happened in a real fairy tale – time quickly and unnoticeably curves its trajectory, and from linear becomes cyclic.

We wish we knew some Thai language. Surely, you can smile, you can use gestures, you can express lots of things without even opening your mouth. But even though – there are lots of things happening around us, to which we do not have the key, or simply we don’t know what to say. We don’t use ice in water or drinks, but you get it in the cups before you fill them in. We don’t use fans, but how can you explain you would rather turned them off? We use toilet paper in restrooms (instead of Thai method of cleaning their bottoms with a hose) but how can you ask where the paper should be thrown away?

We order rice and chicken without red chili, because we don’t like spicy food, but the meal is so hot that we can’t eat it and we have to order something different, which in turn, appears to be absolutely gorgeous. And the funny thing is, you don’t know what it was. You’d like to get to know the name of that dish, but even if you figured it out, it’s impossible to repeat it – all attempts to imitate Thai language end up with laughter and misunderstandings.

So, we create our own phrases and names, for example: grilled banana (pronounced something like kuey ping), or banana with sticky rice (hau tom mat) or muffins with beans (ha ko), or our favorite – fried banana with coconut cake (kluay khaek).

If our ignorance of the language causes misunderstandings while ordering dishes, it does not pose any drawbacks when we try to find a place to stay for the night. It turned out that it is enough to enter any village and suddenly you are surrounded by a group of people who want to help you. Almost each night we ended up close to a monastery where we were able to pitch our tent, in an atmosphere of sincere, cordial commitment. Thai people seem to be extremely hospitable. And they always smile. They smile as wide and often as the Colombians do.
[Show as slideshow]

Usually, they do not know anything about Poland, and it is not surprising to me at all. Some Poles should come to Thailand to see that Poland is not the centre of the universe and millions of people carry on living quite well without being aware of its existence. So, we try to explain, if we can, that we come from a country with its own language and a thousand-year history, although now without a king. I mention the king quite intentionally, because Thailand has its king and his omnipresence is very noticeable – on hoardings, billboards, walls, monasteries, banknotes and coins.

By the way, the pride of the Thai king is not necessarily felt by all inhabitants (though Heaven Forbid, you must not admit it and show any disapproval in public), since we saw portraits of the late ruler – Rama IX, abandoned in the rubbish bin. Apparently, the monarch here, like in the United Kingdom, is an unprofitable institution, but nobody seriously thinks to abolish it.

We are white, we are strangers, and yet, or maybe because of that, we are treated as partners. We are treated like a child who sometimes needs to be helped to understand the world. Nobody tries to cheat us. The people we meet want to help, even if our mutually understood vocabulary comes down to ‘good morning’ and ‘thank you’. Generally nothing more is needed. How easy it is to be good. Or just a bit better.

I was wandering once, why those people are so nice to us. Maybe their positive attitude is misleading because and it is only culturally conditioned. As we know, appearances sometimes may be very deceptive. But even so, I‘d rather meet someone who is seemingly good, instead of being with people who openly show aggression and lack of tolerance.

So, we are in Chiang Mai, in a hotel for which we paid the equivalent of about one hundred American dollars per month per person – this information is for those who ask me who supports my long travels. I do. I earn some money and then I spend them. Mainly on food and accommodation. Plus I buy spare parts to the bicycle, and common things such as toothbrush, soap, sometimes shoes (but clothes I change seldom – on average each three/five years, depending on their quality).

The last years I used to get by having equivalent of about three hundred American dollars per month. For everything. It is not much, I agree. Sometimes it would be better to have a little more, for example, in order to find a safe place to stay for the night or to buy more food. But it’s ok. I don’t starve, far from that. I can’t complain. And Thailand, luckily, is pretty cheap, comparing to Europe, or to the United States.

But let’s go back to Chiang Mai for a while. We have peace here, an air-conditioned room, a few pounds of free (!) bananas each day (that reminds me my stay in the United States, where I had to pay a dollar for one banana), free drinking water, our own coffee maker and a bazaar with a mass of good food, just ten minutes walk from the hotel, where the dinner costs an equivalent of one American dollar.

Surely you may find in Chiang Mai and in other parts of Thailand more expensive and elaborate meals, if you are unwilling to eat directly on the street with the locals. You may find good restaurants with waiters, where you will spend ten times or more buing one dish. But the street food is cheap, tasty and definitely healthier from lots of stuff you find in European or American supermarkets, including those with a very funny label ‘organic’.

We came from Bangkok without any GPS. Actually, we don’t even have a cell phone. Really – you can survive pretty well without those ‘amenities’. We are guided by the sun, the stars and the signposts, although those are not always legible. 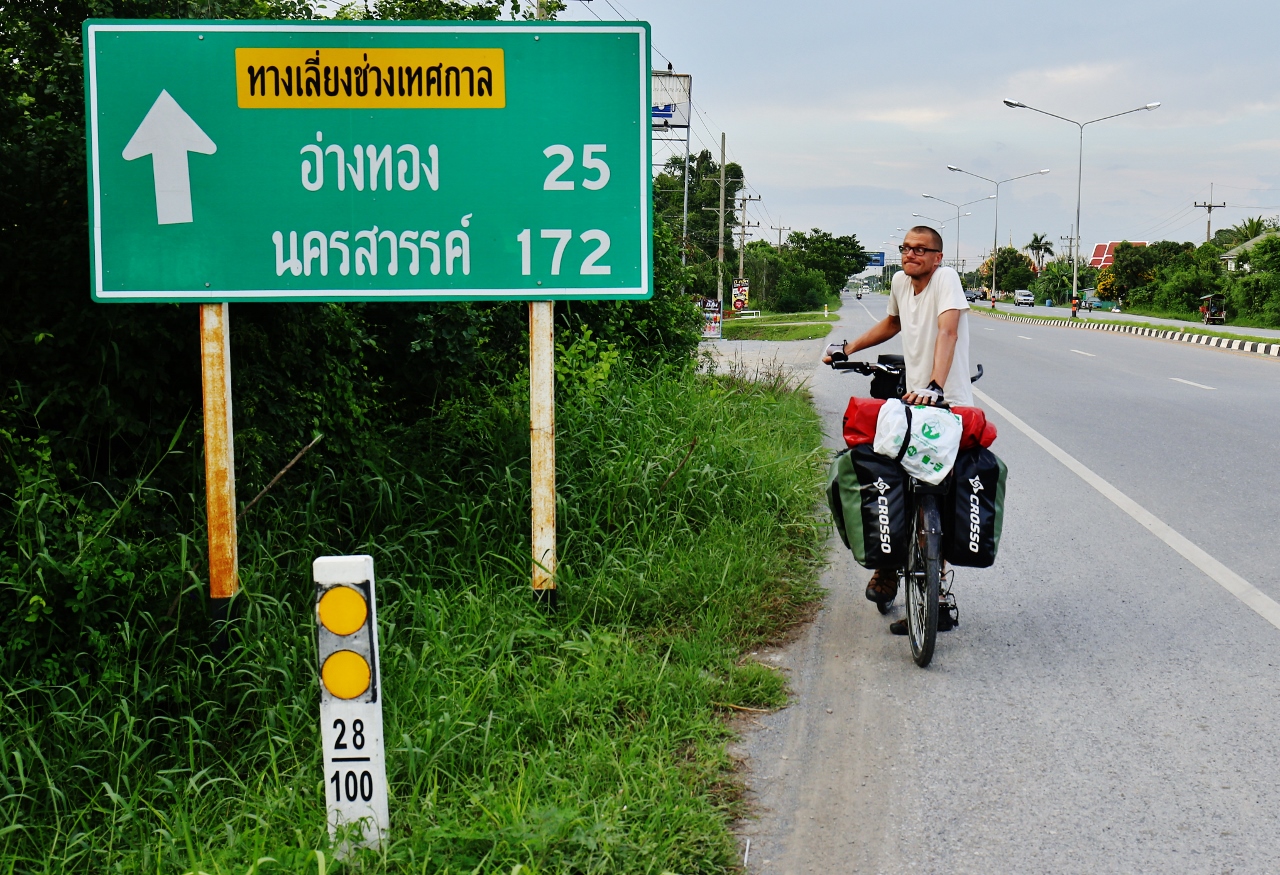 Maybe it’s even better that we don’t understand everything here. There is a room for imagination. The room of imagination. A small one will do. A tiny room (for) the imagination. With a large window wide open. Open to the world.