‘It’s the perspective we choose – not the places we visit – that ultimately tells us where we stand. Every time I take a trip, the experience acquires meaning and grows deeper only after I get back home and, sitting still, begin to convert the sights I’ve seen into lasting insights.’ Pico Iyer

– I’d rather you didn’t put up your tent there. You will break the silence. Look at the cross and the plaque. Haven’t you noticed them before? Ah, well, you young people, you have eyes, and still you do not see. I’d say the same about her. She didn’t pay enough attention, and that’s all. Although who knows who should be blamed. It happened three years ago. That day she was returning home from school, where she worked, when she was run over by the truck. And that’s it. The driver said he horned, but he had no time to slow down. She got straight under the wheels of his car. He wept as a baby, he cried out that he had seen her, but couldn’t do anything.

I came out of the house, I saw everything, and it was me who pulled her out of the road. Maybe she wanted to commit suicide, who knows. She was always a little weird person. Too bad that the driver was found guilty. And the kids didn’t have classes for a month. It was necessary to find them something to do. Why are you nodding as if you understood, you don’t understand anything. Get a move on from here and put up your tent next to the hospital. There is plenty of room there, and leave that palce in peace.

Accompanied by three unbearably barking dogs I obediently followed given advice, and found a good place in an abandoned-looking house, which like majority of adobe structures in Bolivian villages appeared to be uninhabited. And it would be difficult to determine whether anyone ever lived in it or maybe someone abandoned it suddenly long before its completion and left it alone in the wide open space of the wind and the sand, which one day will fill all those earthen walls and will cover them up without leaving any visible traces.

But the building turned out to be a real hospital, and real people worked in it, which I realized only in the morning. I got a cup of coffee for breakfast, a bottle of water on the road and a bag of coca leaves, cause I complained about the stomach pain. A few days earlier I got Delhi belly. Did it happen because of unfiltered water I drank or maybe I ate something wrong, it’s hard to say. Most likely, however, it was not the water, but cocoa I drank for breakfast as a starter for the dried llama meat. I do not know why I did it, the more so because I saw that the milk used for preparing it was not entirely boiled, only slightly heated. A greasy broth eaten a few hours later settled an issue. My biography was cut short for two days. I could not even stand up, I had to go to the bathroom on all fours.

Chewing coca leaves and avoiding Bolivian cocoa, I got to La Paz. The road from Potosi was beautiful, though quite hard. Frequent climbs and descents to the next valley, smelling trucks and everything at a height of about twelve thousand feet above sea level.

And dogs. Even more impoverished than those I used to encounter in Argentina. The only difference is that Bolivian dogs do not come up with sad eyes and do not stop a few meters away, waiting patiently for any human gesture. Those Bolivian beasts throw themselves immediately under the wheels, running along the road, growling, barking, trying to get a steadily moving calf, or at least to snap a red pannier.

Well, you have to stop finally to frighten the dogs away, or begin to talk to them. Surely, without any words. Words won’t help here, they are absolutely useless. Those dogs are psychotic, so you have to treat them as some psychic creatures. Forget about throwing stones – the beasts will make it up on the next passing cyclists, especially on those who are not familiar with appropriate methods of dealing with Bolivian dogs, and God forbid, start running away. Any attempts to escape only infuriate the barking creatures. You have to stop and to look in their eyes to see what’s inside of them. You have to exchange energy. Send a warm stimulus and wait.

“Non-verbal ways of interaction are probably phylogenetically and ontogenetically older than manual and verbal. They decide on a direction of movement in the social world. They tell you whether you can get close to the signal source, or whether you need to escape or fight with it.” A. Kępiński

And suddenly the world opens up. Imperceptibly. Just before La Paz I turned towards a snowy massif, which was visible from the main road. Something drew me there. Quite clearly I felt a sort of light pushing. After a few minutes I stopped on one of the hills. There was unbelievable silence around me. Distant buildings of La Paz seemed so unnatural – ridiculous, unnecessary dots glowing in the sun.

I spread my sleeping mat and squinting in the sunlight I looked at the sky. The longer I stared at it, the more its colors varied. They glowed, and then they darkened, as if some geometric, colorful patterns landed under the eyelids, playing a kaleidoscopic spectacle for a single viewer. But I was not alone. There was someone else. A woman. I noticed her only after some time, actually I heard a loud noise of flinging rocks. 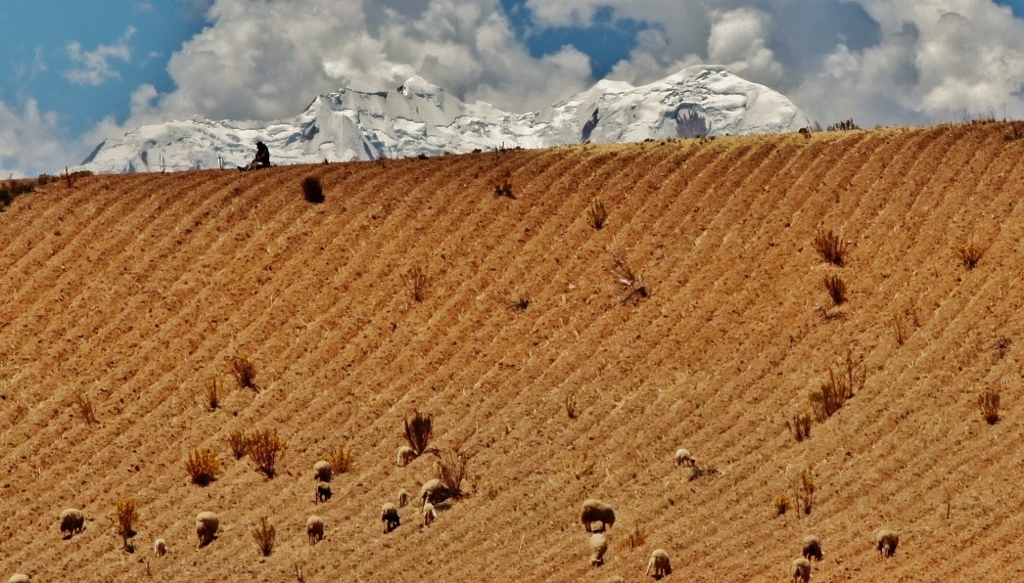 I do not know if she saw me. I could not stop staring at her. She was sitting on a top of the hill in the background of the glacier-covered mountains and was hurling stones. Actually, I wanted to get up and to approach her and to say something or to ask, but at the same time it seemed to me that it would be better not to move at all. That actually we still were communicating with each other through the thoughts that we could fill in any words. Any imaginable words created in that mutually understandable language of feelings and emotions.

When I finally got up and wanted to move on my way, something whistled in the air. I turned out and saw moving sand, a few meters from me. A fragment of land rose slightly and spining incredibly fast around its axis was moving in my direction. Meter by meter, that slender fragment of a thickened matter was approaching me slowly, and when it was really close, suddenly it left the ground and firmly went straight through my body. And then it lifted high, it whistled more clearly and finally splattered with a dull bang, as if a huge soap bubble went off.

Maybe at the end it looks similar. The earth is moving slowly, the wind wakes up and in the middle of suddenly awakened sounds a slender, undulating, translucent shape takes us high above in the air, hovers somewhere to the stars, and then everything disappears. And only silence is left, with a picture in it, an afterimage, a fragment of something that remained of us. It’s nice to think that we leaves something, something beautiful, which might be seen when you close your eyes.