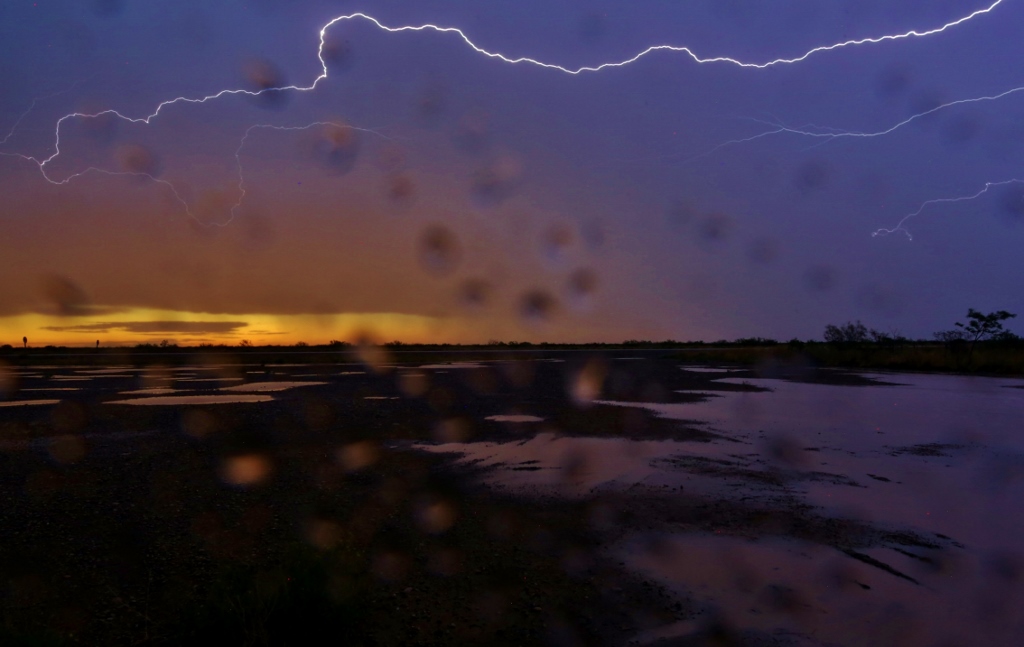 – Now, you just help us out today, and find yourself a place where you won’t get into any trouble. Some place where there isn’t any trouble. – Do you suppose there is such a place, Toto? There must be. It’s not a place you can get to by a boat or a train. It’s far, far away. Behind the moon… beyond the rain…

I did not even notice when they began to gather. I was cycling in a barren, monotonous, almost featureless landscape, in which the absence of any visible bends was replaced by the abundance of low perennials called Ombu. It is not unusual to notice in their shades Difunta Correa shrines, surrounded by hundreds of plastic bottles of water.

So, I was pedaling in a sort of seemingly lifeless countryside, being more among gathering dark clouds, sweeping over my head, than on that asphalt-grassy land. That feeling does not have to be intentionally aroused nor even longingly awaited. It appears itself, especially in those places, where, after several hours of cycling, you begin to feel a total sensory deprivation of your senses. So, you lose the sense of reality, which, even on a daily basis, you do not have much anyway, and even if you insist that sometimes you possess some of it – that reality only exists when it is strongly overbuilt by a kind of sleepy-imaginative one.

So, starting for the third time: I was cycling on the pampa, being pushed by a strong wind, but at some point it became strangely dark, far too suddenly and without any warning. I stopped and turned around curiously. Huge, darkening cumulonimbuses were approaching from the south, looking like a corn-shaped tornado, spreading quickly over my head. I had no chance whatsoever to escape from their black, cloudy arms.

A powerful storm was coming fast. It was clear, that it will reach me in less than an hour, but despite of the fact (or maybe I should say vice versa – because of it) that the nearest town was fifty miles away, I was cycling like crazy, putting all my strength on the pedals, hoping that the upcoming storm will not get me anyway.

Not counting Ombu bushes, which now, looking on the horizon, I vainly tried to spot – there is no place to hide on the pampa. I could have set up the tent, watching the electric spectacle in the sky, but something invisible was pushing me forward. I could not stop. It got dark, the first drops of rain fell on my face, the long lightning cut the sky. And then I saw it. Although initially it seemed to me that it was just a mirage. Nevertheless, I stopped and on the night stain of a landscape I tried to distinguish some shapes. Meanwhile, the rain turned into a downpour. Another lightning. A bright, clear outline of the building emerged for a moment in the black background. I went closer. I stood on a run-down atrium. Heavy raindrops were performing their dance macabre on a tin roof. Closed up windows and locked doors left no doubt that the house was abandoned for a long time.

When I was setting up my tent on the creaking boards, I heard a sort of timid barking. I held the light. Two terribly emaciated dogs were standing in the corner of the building and barking silently they were turning their sights out of a strong beam of my flashlight. I began to whistle and talk to them with a calm, warm voice. The dogs finally got silent. When I tried to approach them, they fled. Well, if the animals are here, I thought, maybe someone lives in that house, and maybe the entrance is somewhere else?

I walked along the building, but found neither another door, nor (which seemed to be even more weird) the dogs. I decided to wait with putting my tent up, thinking that someone might show up later. I put on warmer clothes I ate steak bought the previous day. Then I went back on the other side of the house, because it seemed to me that I heard whining. I somehow knew what I would see there, but the image was far more poignant than what I had expected. Two dogs lay curled up, huddled together on a piece of tar paper, looking at me with a deep sight full of ambivalent feelings – curiosity and anxiety, joy and distrust, but above all – boundless grief. They looked at me with a sight, at the bottom of which a glimmer of hope glowed; the hope for something that may not have been what they had expected to encounter, but it still was something, on which they could build the new loyalty and trust.

I brought my stuff and the bicycle closer, and set up the tent in the doghouse. Then I cooked dinner and we ate it together. The dogs ate greedily, wiped the bowl within a few seconds.

Two reddish dogs. Not as red as all those cats I met withing the past months. I was looking for a red-haired cat, and I found two red dogs. But the questions was – why and what for? After all, I was about to leave them soon, early in the morning. Maybe it would have been better for them if I had not eaten dinner with them, if I had not stroked them in the morning and had not allowed them to be licked.

The small dog escorted me to the street. When we were getting closer, he stopped and started looking anxiously behind his back. He was looking at me, and then at the standing nearby building, which was already bathed in an ambient sunshine.

I sat on the bike and rode away. Then I stopped, took out my camera and through its lens I looked at the small fragment of the abandoned reality. A small, red creature was standing in the same place. He was looking straight at me, but he could not have seen from that distance anything else than a dark spot, rippling over a hot asphalt road.

That day the wind changed its direction.

In the evening I got to the city. I set up my tent in the park. The sky was full of stars. It was warm and the leaves of the trees were rustling in the light wind. The air smelled of grass. Not fully-dreamed dreams were hovering around me. The dreams full of flying birds; birds that never fall asleep, those that dream forever. I waved to them. They came and grabbed me into the sky. They held me by the hand. Their touch was warm and gentle. We were hovering high.

In such an evening, all dreams come true.

Somewhere over the rainbow, blue birds fly, and the dreams that you dreamed of, dreams really do come true.