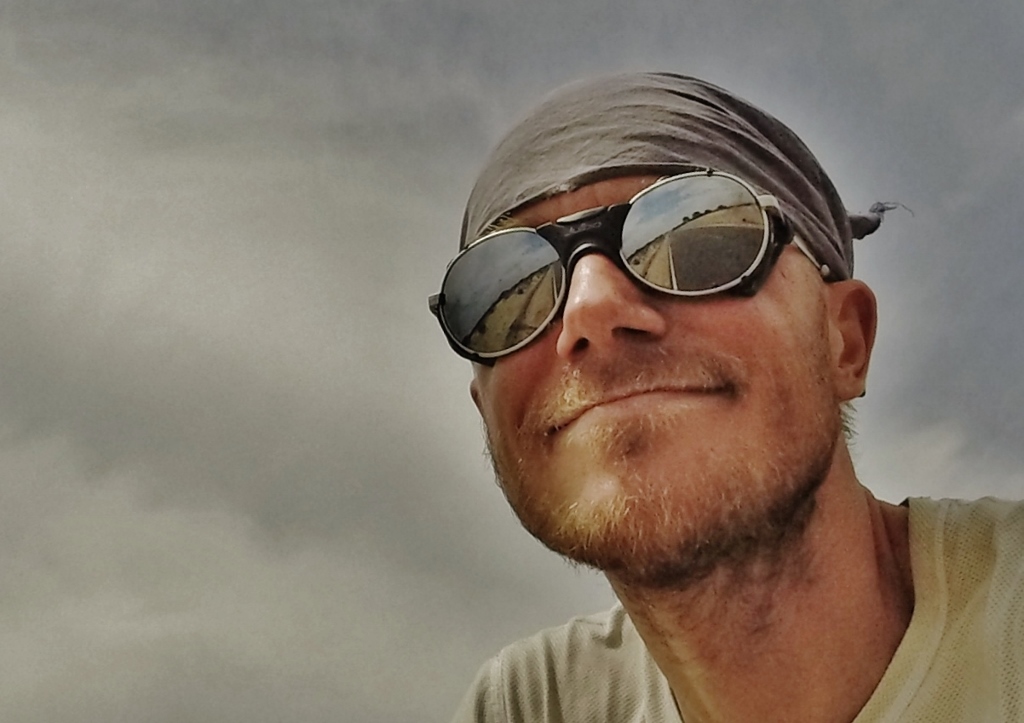 I always tried. Always failed. It does not matter. Try again. Do not be discouraged. Samuel Beckett

No sooner did I see his two toes, emanating from the worn-out sandals, than I looked at the man’s face. His penetrating gaze, clearly fixed on me, I took as an invitation  for a talk. With a bottle of fizzy drink I got closer.

– Tom Tyrone Eger Arce, awarded the medal of merit by the National Institute of Culture, Ambassador of Science, a herbalist and a healer.

– Peter – I replied hesitantly and quickly sipped my drink.

– I am a professor – he said, but noticing that it did not make a desired impression on me, he added: – Recognized by the Red Cross and cited in journals, at home and abroad.

– And I’m from Poland and I have a bike – I said, then sipped my drink again.

– I can see it – his bushy eyebrows rose for a moment, then dropped, as if in anger. – Do not drink this stuff. You’ll be sicker than you really are. Surely you’re sick, everyone is. Tell me, what ails you? Do not hold urine and suffer from impotence? I treat everything, leukemia, diabetes, cancer, Alzheimer’s, or even Ebola. Haven’t you been to Africa recently?

– I have not, but I have problems with my sinuses. I have been going with a headache for nearly four months, I can not get rid of phlegm from my throat – and, as a sign of which, I spat violently.

Professor Tom got interested in the subject, and asked me to bring all the specifics I was still taking (herbs, spicy liqueur, Ambroxol, allergy pills and something else, from which I’ve lost the package).

– Throw it all away, it will not help you, but I’ve got something for you. We’ll go to my house, I live nearby, I’ll make you a tincture for gargling, three liters, and after three weeks of using it, you’ll get rid of the phlegm for ever.

I thought that three liters would make substantial excess to my luggage, but, definitely, it might be worth a try. The man stood up heavily, and I, in order to get rid of any doubts, asked about the price of that patent medicine.

– Normally I sell it for two hundred, but I’ll prepare it for you for just a hundred American dollars.

– One hundred American dollars? – I asked, thinking that maybe I misheard something.

– Yes, just one hundred, this promotion is only for you, I am a professor, normally I sell it for two hundred.

I look at the man’s raised bushy eyebrows, thinking about sticking out not so far away big toes, I shake my head, get on the bike and without saying goodbye, I set off, wondering if “Professor” was ever able to sell this tincture to anybody for any price, or maybe I just look so naively that unflinchingly and with enormous self-confidence, one may try to palm me off with any shit for “only” a hundred dollars.

This queer conviction, that my face really reveals gullibility, is established the same day, when in the evening, a man bothers me asking, why I have been standing on the threshold of his house for ten minutes.

– For ten minutes? – I replied, wondering at the same time whether I completely lost any sense of time, or I’m on a good way to stop it whatsoever.

– I’m just standing, frankly speaking, I do not know what I’m doing here.

– And how long are you gonna stay?

– I do not know. Maybe five minutes more.

– But you think, or you know? – And without waiting for my answer, he added: – Because it’s not the same. When a man thinks, it does not know, then he wonders and doubts, and so on, so it is in marriage and religion, too. You think there is God, then you’re wondering if there is God, then you have a problem with that, if there is any God, and at the end, there is no God. You think you’re happy, then you’re wondering: Am I sure I’m happy? You do not know, and when was the last time you were happy? Maybe a month ago, maybe a year, well, you don’t remember when you were really happy, it means that you are unhappy, and happiness is somewhere else. And you, you’re lucky?

– You see, you think so, but you’re not so sure, but it doesn’t matter, I know a good way to get some happiness, let’s have a beer. You smile, it’s good, I see that you simle a lot, because you have wrinkles in the corners of your eyes, inevitably from laughing, and when you laugh, you do not think, you simply are, the whole body is moving, but I should stop talking nonsense, come, let’s go for a beer.

I say that I prefer coffee.

– Surely, coffee will do, but firstly a glass of beer must be had.

I do not know why, but I let this man drag me into a dingy bar. I was walking next to him, not really listening, wondering why I still attract all these strange people. I look and I already know that they will approach me, perhaps I myself have something of a bum? Of course, there was no coffee, everything smelled fresh piss, and Mr. Gino just wanted to have a drink at my expense. Anyway, that day he missed the target. Possibly the day before or the next day I would treat him to a drink, but not that day, not that night, when I was looking for silence. It was not around, I was looking for it in my head.

I went out of town. Why is it so dirty here? Why there is so much crap around the road, one huge surrounding trash, in symbiosis with a culture of ubiquitous noise, honking horns, attracting attention in a sudden and violent manner, as if to compensate for this sterile, dry, desert landscape.

It’s still very windy, this time I’m not pedaling at night, I’ve had enough. I put up my tent on a sandy shoulder. It’s cold, it’s dark again. I take off my clothes and hide myself in my sleeping bag. I say ‘good night’. It’s hard to say to whom, probably just to myself. My voice sounds strange, it’s unnaturally alien. As if it does not belong to me. Just in case, I repeat these two words, loudly, clearly, to make sure I am still here and there. And then I listen. I listen to the rustling of the tent, restless flapping of the thin flysheet. I listen, as I usually do in the evening, hoping, that before I fall asleep, surrounded by a cold whisper of the wind, at least one time, just only once, I will catch a warm response. Good night, Peter.