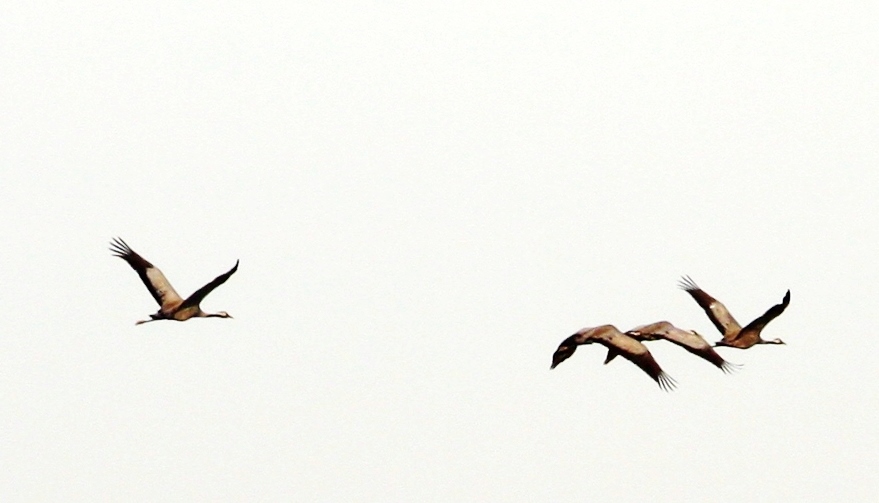 I walked through the meadow, just next to the field-patch of potatoes. I was watching my lengthening shadow, jumping on the furrows. The earth had the fragrance of chilly evening. I startled four storks. Then I lay down and listened.

The last time I was lying on this meadow about twenty years ago. In the same place, at about the same time of the year. I waited. I knew that eventually they would drive up from the south, just from above the woods. The unmistakable sound came first, then dark specks appeared in the sky. They flew quickly and thickened the air with their gaggle, incited over my head, not faded. They looked like some notes of polyphonic songs. I counted over a hundred birds. I shouted after them, but no one paid any attention. They flew away.

On the way home, I went to the old glassworks. It is still full of ghosts. A janitor chased me. He was right, I tresspassed, without being asked. Over the fence, sharp bushes. I wanted to talk to him, but of no avail. As if we both spoke another language, kind of.

In a book, Glenn Gould, the art of the fugue, Stefan Rieger, referring to the music composed by Johann Sebastian Bach, mentions that some of his compositions seem to have no beginning or end, that they seem to emerge from nowhere and they return to nowhere, that one may sense pulsation of infinity in them. A similar tone expresses Bohdan Pociej in his book Idea, sound, form:

Some characteristic structures in the music of Bach seem as if they could be developed (attenuated) to infinity. The work of the composer is, however, to give them a shape, to tame or limit them, close them within the framework of the finiteness. In its immensely logic development the composition aims to develop from the beginning to the end, the ending is absolutely necessary here, but we still feel and know that it is never final. Bohdan Pociej

Just by chance, I’ve came across on interpretations of Bach performed by Raphael Rogiński. And then I heard an interview with him, when he talks about “swallowing” of ghosts. And then I went back to his recordings. Because when I listen to them, I feel that beyond longing for the road and desire to plunge into the open space, his play inspires me, brings to me something important, suggests unconscious contents, floats somewhere above the ground, and after fading – still returns. As if his play created the illusion of stopping the passing time.

This is the swollowing of ghosts. Yes, I feel that I ate too many ghosts. But this is normal. For thousands of years people have lived in such a way as if they ate their souls. For me this is musicology of space: you eat the soul of the landscape, the soul of the people… You have to be a psychic. It is a characteristic feature of those who feel the need for hitting the road. Raphael Rogiński