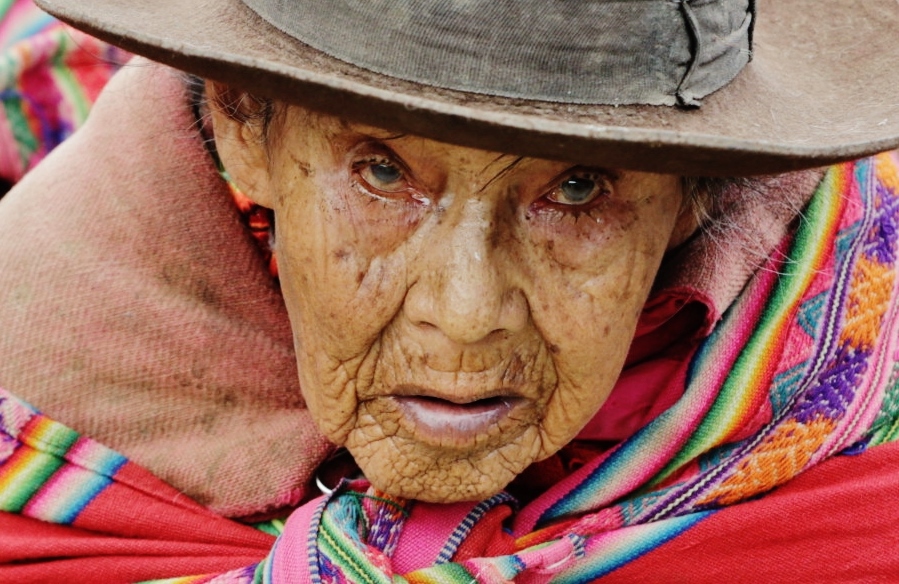 Old age. The world seen from such a high mountain is specific. It doesn’t not want to be holistic in any way, consists of many unfulfilled expectations, a couple of friends, many meetings. And lots of illusions. R. Kalicki Dziennik Patagonski

You could say I finally got my comeuppance. Cleverly, professionally, in broad daylight. It was nearly noon. I was going to leave the city, but, even though I was not too hungry, I thought I would go for a bowl of soup. I went into a restaurant, and left the bike outside, leaning it against the metal door. As I usually did, I unbuckled my notebook from the rack and took it with me, and I buckled the frame with the front wheel.

I sat down at the table, maybe two meters from the bicycle. More specifically, in fact, I only saw half of it: rear panniers and a part of the frame, while the front part was exposed to the street – fairly busy at this time of the day. It would never occurr to me that someone could rummage in panniers, not being seen by passing people. Anyway…

I ate soup, and gladly went outside, and then, leaning over the bike to release the clip, I saw an unfastened pouch. Literally, at the same time, I raised my head and looked at the bag attached to the steering wheel. One Velcro was unfastened. I put a hand inside. Empty. Somebody took the camera with the lenses. I didn’t even have to look into panniers. I knew they were empty. I sat on a high curb, next to the bicycle. I do not know how long I sat there. I felt a strange inertia, I was completely indifferent, I sat and I could not move at all. I even did not want to move anywhere from there, I wanted to be there, to sit, and to dissolve in the stillness. I wanted to convince myself that despite what I just saw, in fact, nothing happened, it was not true, I just invented something, or someone made a stupid joke and soon will approach me with a smile, handing stolen stuff.

And, when I was sitting there, becoming to be more and more aware what really had happened, I saw a strange looking man, definitely a Peruvian one, stopped next to me. I raised my head. Our eyes met. A man smiled. He said something, but his voice was coming to me as if through a closed glass door – I was able to see his mouth moving, but in no way I could distinguish particular words. Only after a while I realized that the man spoke to me in Russian. I answered his questions, heard hundreds of times, how, where, what, why, and I said that I had been robbed.

Everything what happened over the next few hours, I remember as a sort of action movie. The man, who introduced himself as Neil, immediately rang somewhere, and after no more than three minutes, a police car came in. Three armed men appeared, whose behavior towards Neil was rather odd, or at least unusual. I do not know who he was, but the police behaved in a manner as if they were his subordinates, who additionally did something wrong and now have to explain themselves. The men asked me a few questions and then asking me to wait a moment, went along with Neil on the other side of the street.

I sat on the bike, watching them as they were approaching some people, talking to them and recording. They returned after about ten minutes, threw my bike on the back of the police car, and then drove to the police station, where I could make a statement. The whole bureaucracy lasted a few moments. The policeman wrote a few succinct sentences and asked me to put my fingerprints on the recorded piece. I was doing everything like an automaton, still with emptiness in my head, with lots of gloomy thoughts, slowly reconciling myself with the thought that perhaps someone Above decided for me to finish my trip.

When I did the fingerprints, Neil came into the room. He said he would have to go somewhere, to do the other things, and that he was very sorry for what had happened, but I should not worry, the police will do everything to get my stolen things. If not today, then tomorrow I’ll have them back at the latest. I looked at his benevolent face, but instead of a smile, my eyes flowed with tears.

– Do not be sad – said Neil – come on, do not worry, brigade B will find everything, they will take care of it, right, Jorge?

– Of course, we will find everything, anyway, we have descriptions of the suspects, a shoemaker’s wife saw those who had taken your stuff. There were three of them, one was keeping an eye on you, while the other took the things. She said she did not know them, but it was clear she was afraid, we’ll go there again, we’ll talk with her husband, he will convince her.

Having said that, he patted me on the shoulder paternally and asked me to accompany him and three other men. First, we went to the shoemaker. I saw from the inside of the car, as they entered the shop, and then, after about five minutes later, they returned back, clearly satisfied. We went off with a squeal of tires. Nobody said anything. We drove through the narrow streets, routinely breaking the rules to stop finally at a small bar. I heard the clink of unlocked weapons. The policemen went outside. One stood at the entrance, and two others went inside the bar. After a while, they went out into the street in the company of deathly-pale, slightly tipsy man. I watched as he firmly shook his head and gestured, all in the attitude of a reprimanded boy who tries to explain that he’s got nothing to do with anything he is accused of.

Everything took no more than two minutes. Police officers returned to the patrol car, then we drove to another bar, where the situation repeated, except that this time all the men went inside and came back after a good ten minutes. After this visit we drove through town slowly, cautiously, and after a quarter of an hour we went back to the police station again. There, I was led to a room where, next to a small desk, there were two other men.

– Here you are the entire brigade B – said one of the men, and introduced all of them: – Loly Reyes, Jose Valencia, Alan Gomez and Jean Cruz, and I, Jorge – Grupo B, Divincri Ayacucho.

I looked at all these smiling faces and wondered why there is actually such a festive mood here. Why do all these men have such happy faces, and why we they stand unnaturally, as if waiting for something?

– What would you say to a little surprise? – said Jorge, pointing at a young lady entering the room. She was holding a black bag. – Look inside and see if anything is missing – he added.

The woman put the bag on the table, then bowed and left. I looked at grinning men, still standing in a semicircle. I walked over to the table, touched the material, and looked inside. There was a camera, lens, and all. I looked again at the standing men. I could not believe that these things came back to me so quickly. Just like that. I held the camera in my hand, and shaking my head in disbelief, thanked perhaps the twentieth time for such quick and effective action.

– We are very happy that you’re happy, for us it’s the best reward. We would like you to have good memories of Peru. You’ll want to make a complaint and sue the men?

– No, of course not, I’m glad that I have these things back, but actually, how on earth you found it so quickly?

– We have our ways – replied Jorge and winked. – Well, in that case, put your fingerprints here, and you can leave. Just remember to be a little more careful now, not everywhere there are good and honest people, especially in the cities. Here it is not so bad, but if you went to Arequipa and there, God forbid, never leave your bike, even for a moment.

I’m in Cuzco. These few hundred kilometers from Ayacucho were one of the most difficult I have had the opportunity to pass in my entire life. There are eight major mountain passes along the way, five of which are more than 4,000 meters above sea level. My sinuses again strongly rebelled. The last hundred miles I took the bus to Cuzco. I had no strength. I’m resting for two days in the city. I visited the doctor again, I got another shot in the ass and another antibiotic (but only for five days), plus a handful of another colorful pills. The road from Cuzco to the south, in the direction of Bolivia, seems to be easier. It leads through the Altiplano and there are no big uphills.

Leaving aside the difficulties of the road from Ayacucho, I would like to thank all these friendly people I met along the way. How much warmth and kind words I received from them. And how much it means. On the way more and more unbearably lonely, walked in a constant state of fatigue, concealed under the guise of a wide, fake smile on my face.

And although I do not know what all is it about where it will lead, I go further, with a strange and incomprehensible obstinacy, that still does not allow me to stop, and keep pushing me away, slowly and inexorably closer to the end of this trip.