That gaze through the glass, thrilled by inaccessible, tightly enclosed space and amazed by the contrast between its astonishing transparency and inability to exceed it. Face halted by the glass, impeded on it, becomes visible – a bit pathetic, more funny, always immediate – an expression of desire, lust, which was triggered by what is on the other side, and at the same time becomes the immediate expression of its disappointment, momentary unhappiness due to the impossibility of getting to that other side. M. Bienczyk 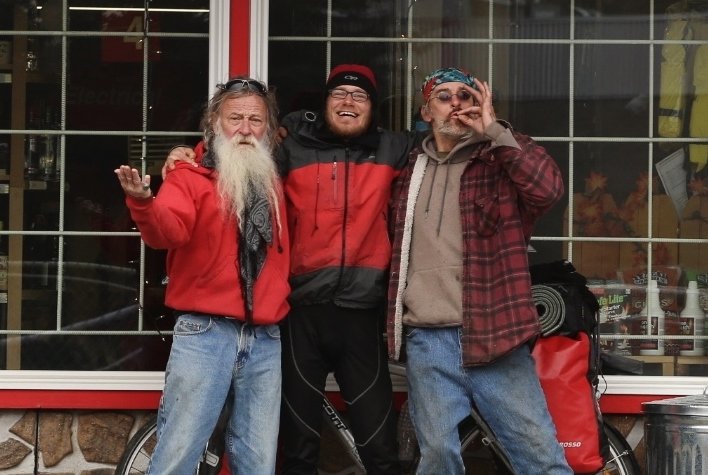 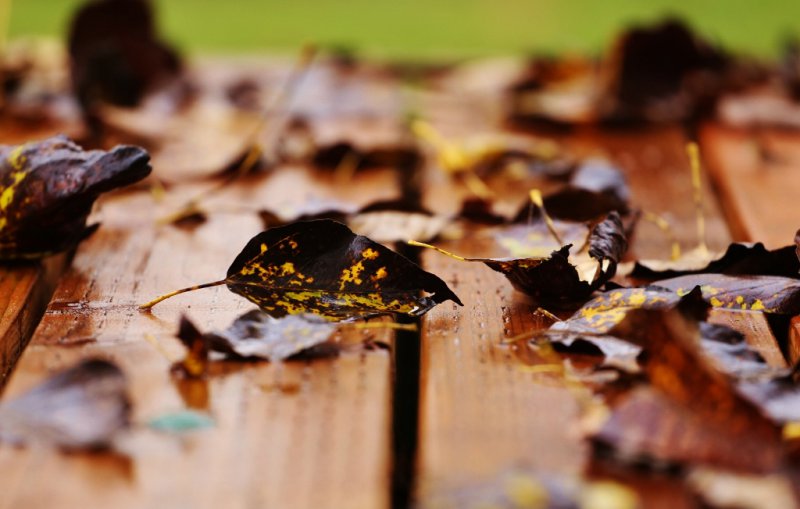 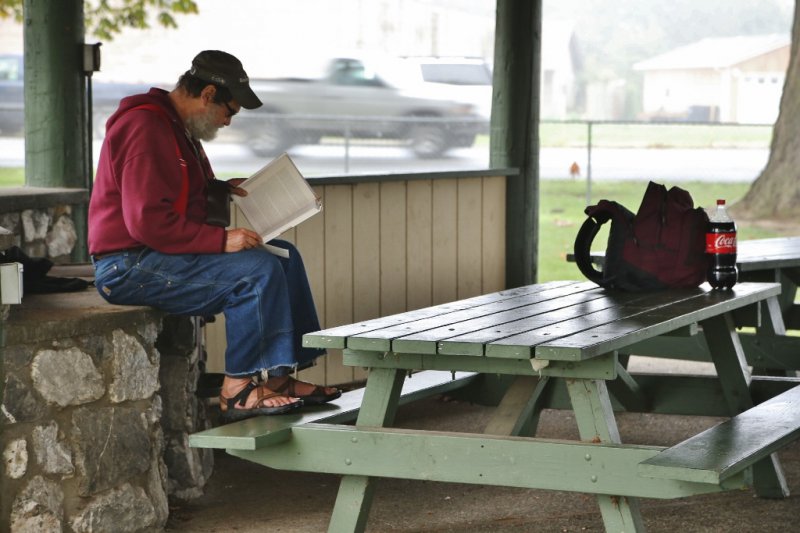 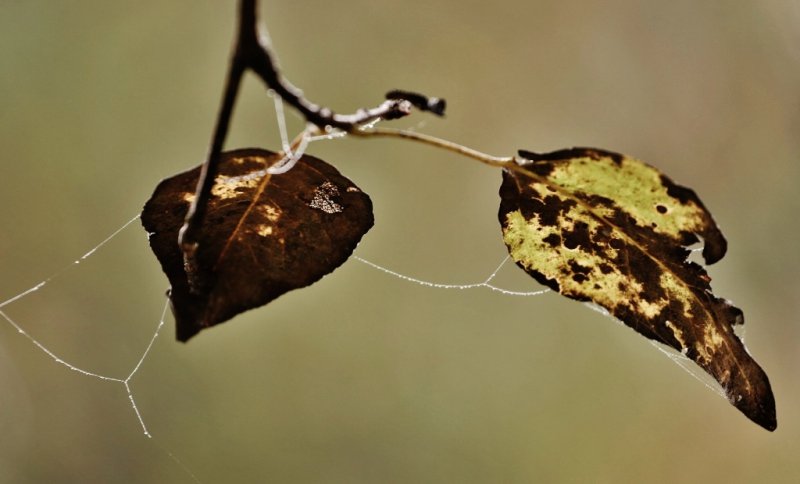 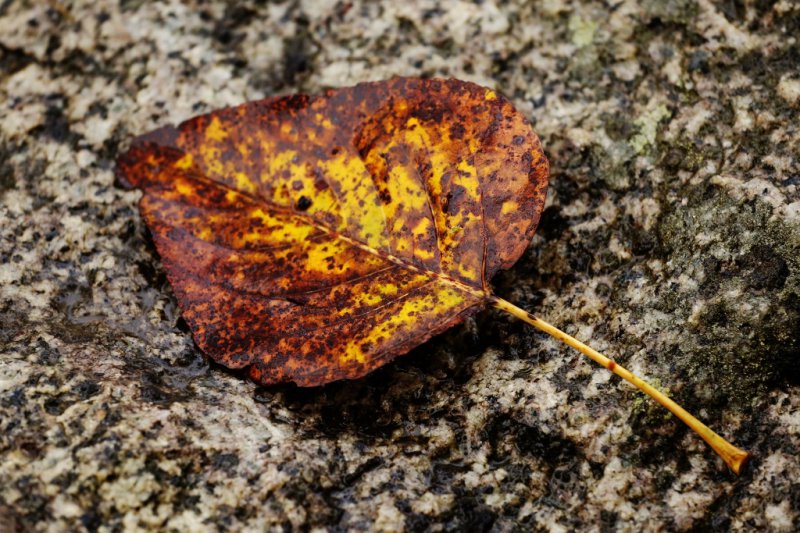 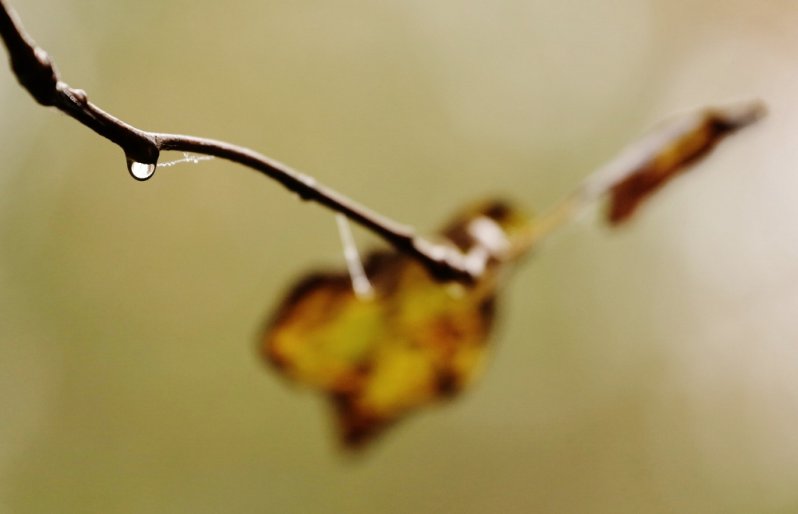 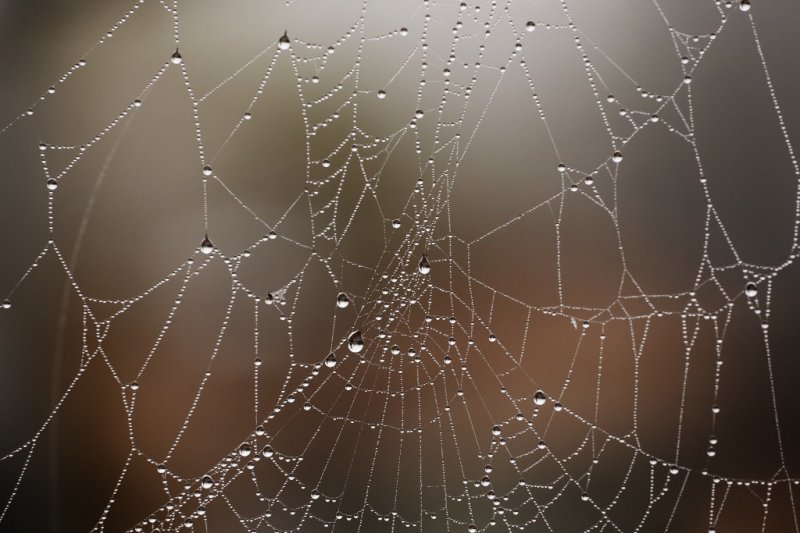 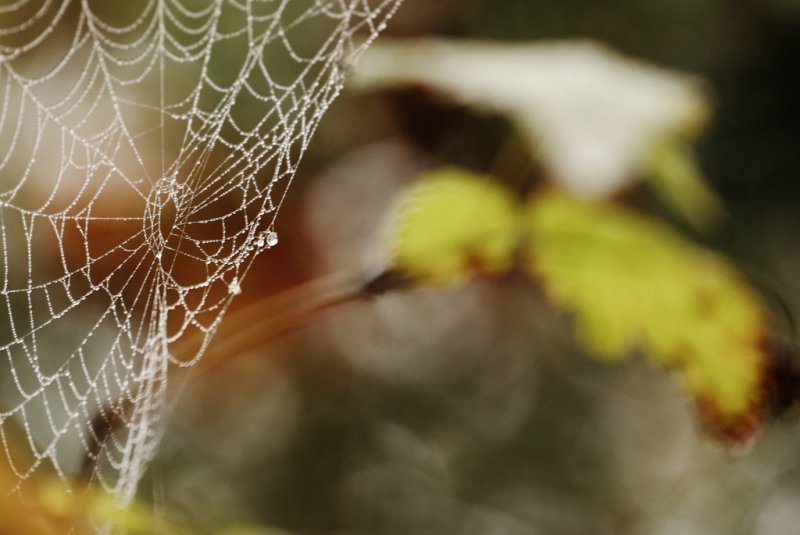 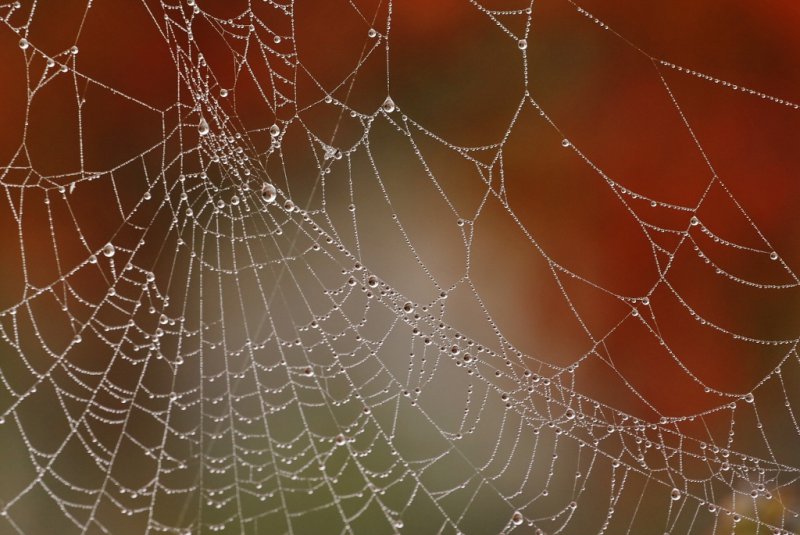 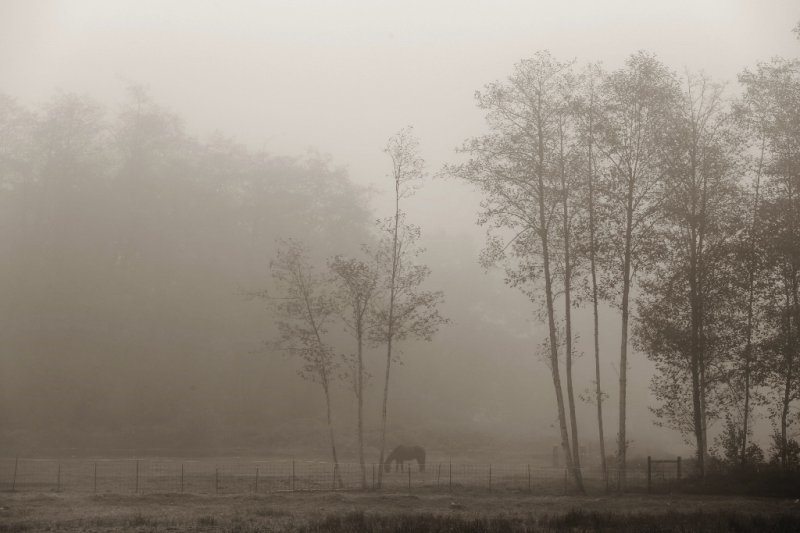 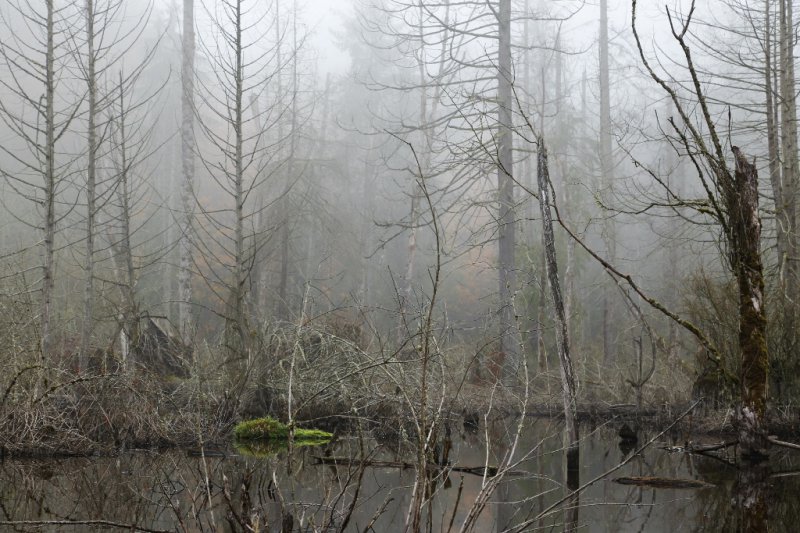 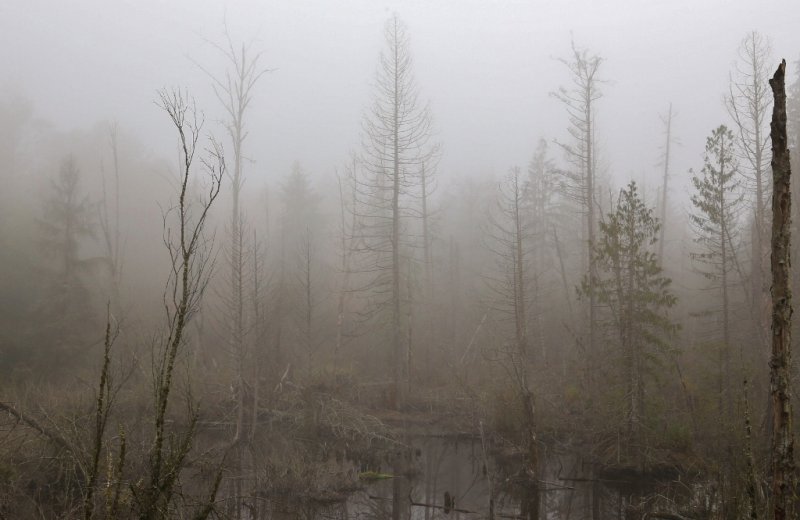 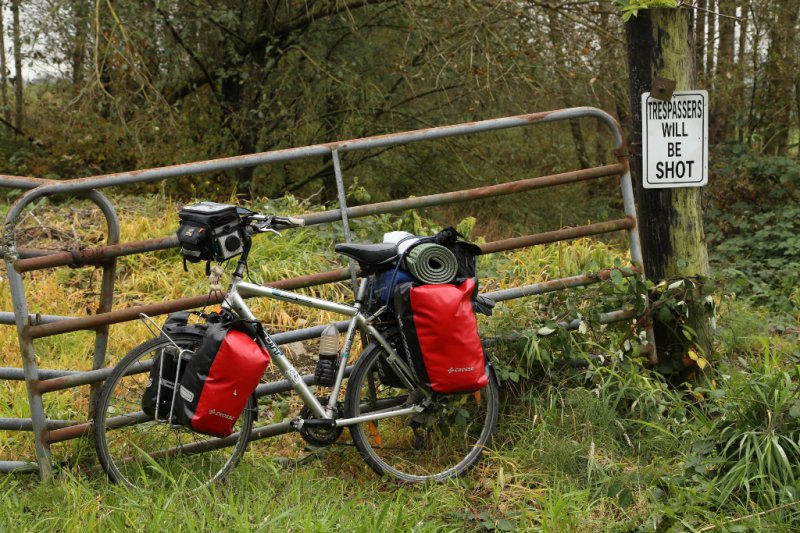 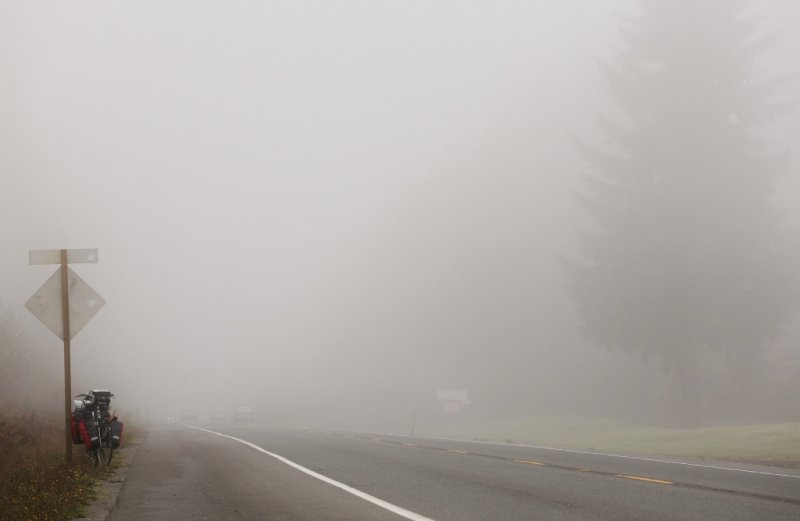 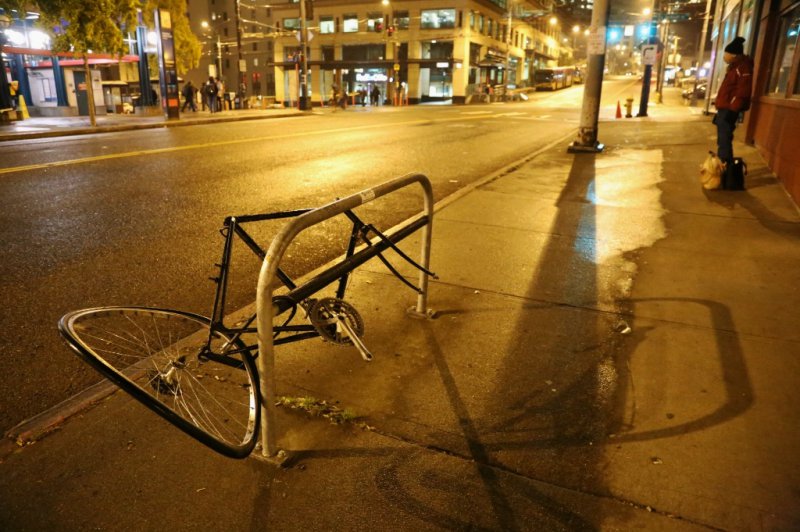 I do not know why, but I’m beginning to have a strange sentiment for the United States. But it is far from being mawkish, nostalgic, reminiscent. Yes, I am looking again at the same places, landscapes, houses, with a similar associations and analogies, with the impression that I had been here before, but in somehow intensifying moments of reflection, especially in the morning, immediately after waking up, I see that alienate memories to fade, wither under the constant onslaught of new experiences, new encounters, new words, creating a different reality, a different scent, my own self-fulfilling universe.

The first morning in the States found me in Nooksack, a small town in the state of Washington, in a very neat, clean park, in the gazebo of which I was able to recharge batteries, light the stove and use the Internet, or maybe I should write that it was not the morning that found me, but it was Mr. Robert Tolson, though the very truth is that we both found each other in the same place, at the same time, as if for a moment in our lives, someone or something had arranged the setting for us, so we could share adjacent squares on a chessboard of our own destiny.

Robert Tolson was reading a book about the Warsaw Uprising, which was brought under his arm along with a sandwich and a bottle of Coke. Mr Tolson is partially disabled, lives in residential home, likes the park, comes here every morning to read, because the library is stuffy and noisy. He worked all his life in the open air, in the woods, where he contracted allergic to staying in confinedspaces. We talked about Poland, about Polish books and movies. With his immense and sincere curiosity and enthusiasm he resembled more a small kid than a grown-up adult. He was full of kindness, honesty and peace. Welcome to the USA! – he said at parting.

State road number nine proved to be a great alternative to messy freeways, highways and interstates that surround Seattle as cobwebs shrouded with dense fog. When I was here two years ago, passing through the entire agglomeration of adjacent towns took me three days. Now I could go directly to the south. I was driving through charming towns, staying overnight in parks or in the vicinities of supermarkets, being cautious of whether or not I infringe on someone’s privacy. The warnings: ‘trespassers will be shot’ were bluntenough and one do not need to employ any musclemen to protect the properties, buildings and land.

So, I stayed in public, not always hidden, which also had its drawbacks, cause in the middle of the night I had to put up with visits of local law enforcement officers, who alerted by frightened old ladies, coming at a very late walk with their dogs, recorded it probably as one of the most important intervention in the month. The police would turn out to be very understanding. The only thing they asked me to do, was to wake up early in the morning, so they would not have to receive further phone calls from practicing jogging residents, concerned about the presence of a suspected intruder.

So I get up every morning, at the crack of dawn, and cycling in dense fog, eyeingemerging shapes of unexpectedly fast ageing fall.And then I go through towns and villages, meeting people, being talked down, invited, being still bestowed, for example, with stories of hippies from Carnation town. Henley Henhouse and Nick Salvino got me in the morning at the liquor store. No, I was not going to the liquor store to complement the inventory, but it just happened that we ran into each other over there.

Henley, Captain Chicken, or Chicken Captain, turned out to be an American veteran, a passionate hippie, growing hisbeard since the holidays in Kabul spent in 1968. He lived in the house where Johnny Deep took his first steps in film. Nick Salvino looked like ‘Léon: The Professional’ and every now and then kept saying that I should have arrived two days earlier, then I couldhave gate-crashed the party – Captain Chicken just turned seventy. I stood and listened to what had happened during the party, which actually still was in progress, but I did not let myself be persuaded to continue the story together on the outskirts of town.

I walk over to the window and look at the yellowed photograph, from which a bearded man, Captain Chicken looks at me. Is it really the same Henley Henhouse, who now hugs me with his arms and invites for nutritious breakfast? Are there his own memories or maybe mine, frozen in the gazewhich now in an irresistible logorrhea came flooding backin my head? Actually it does not matter, I like improbable stories, unreal coincidences appeal to me, though I usually encircle them with a distinctive contour of my destination.

Since my childhood I have possessed a vivid imagination, I liked to make up adventurous stories, and it didn’t interest me much that they did not always happen in ridiculous reality. Reality, which somehow didn’t coincide with the images I knew from the books that were then the main if not the only window, through which one could watch and experience other, more appealing worlds.

Imagination is harmful tendency to see something that does not exist in reality. But the opposite is true, because there is no reality without imagination. What is called reality is just the imagination that congealedinto a routine. Adults think that children are stupid, because they fabricate, that is, they only have the movingimagination and no routine – imagination fossilized in habits. (…) Without imagination the world neither would exist, nor would survive. S. Mrozek

Perhaps it all started then. When I was five or six, and drew ships in a colorful, geographical atlas, inventing imaginary worlds, longing for places, the existence of which I had no clue. Each of the crumpled sheets, each odd, hardly spelled out word, all shadesof blue on seas and green, yellow and brown on land – all concealed mystery, attracted, fascinated, were the overture to all subsequent trips, to this one as well, if not most.

Because also this trip, which I elongate south – even it began in my childhood, grew out of longing for the unknown, the desire to escape to another world, to discover its secrets, and thus return to the sources, to the beginning of everything. Because the journey does not begin with buying a ticket on the plane, from packing luggage. The journey starts in one’s heart and mind. The love of the world – is a sense of each journey.

This feeling is hard to extinguish, even if you fail, even if in the end something goes wrong, something screws up, because it can’t be too easy all the time, too intoxicating, too good. I was driving, looking around, I do not even know how it all happened – somehow fell down, and woke up on the ground with a swellingknee. How did it happen? (Mom, please, do not be angry, I really was not going like Satan). Maybe I was hit by a tank, or I was scratched by a naughty thought, no matter what it was, somehow I cannot help feeling that this was the destiny of that day. Has anything changed by it?

I believe in cats and rum, and the sun, green trees, and in freedom. I want to be allowed to die of starvation if I do not manage to get by. And to live, for God’s sake to live in such a manner as I like. A Bobkowski

Is it supposed to be the end of just recently launched tour? If the answer is yes, so be it. At the moment I’m lying on my ass, resting. Maybe I’ll manage to go, maybe not, we’ll see. My leg did not fall off, for the time being has been fairly well, although I can’t bend it at all. Nevertheless, I still have the other one, from tomorrow I will start training to cycle with one foot. On the flat terrain it should be fine. In case of any problems, Rafineria and Moomins help me on the climbs. And for now – cheerful morning greetings, please do not worry:)